Skiing legend and Profeet ambassador Konrad Bartelski shares with us his all time top three ski runs. Konrad is a former British alpine ski racer who produced the best result by a Briton on the Alpine Skiing World Cup circuit in 1981 by coming within 0.11 seconds of winning a World Cup downhill race at Val Gardena. 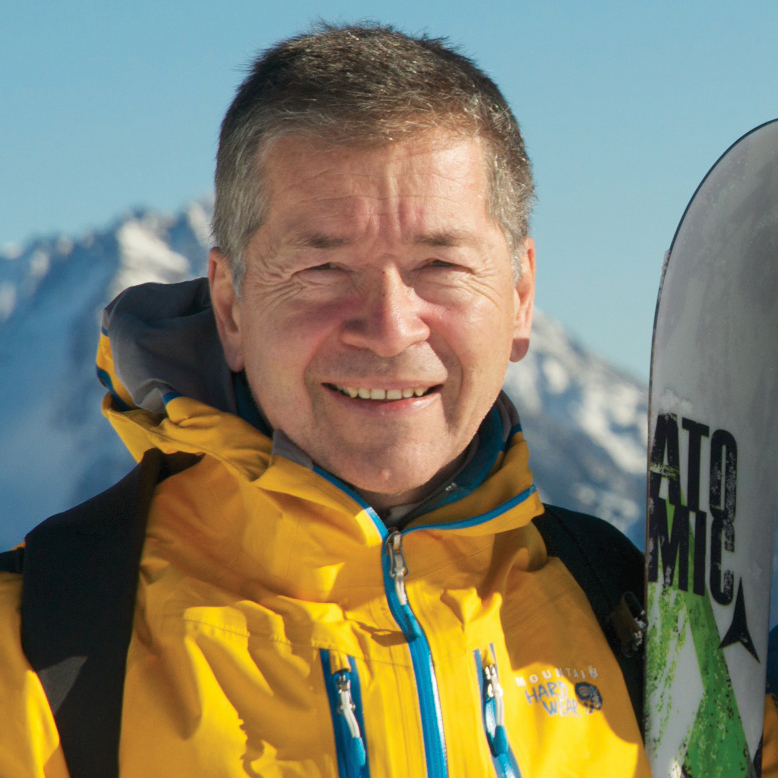 I have been skiing for six decades now, so I am hugely fortunate to have a few memories to choose from. A handful stand out, although it is not only the geography that dictates the quality of the day that’s firmly locked in the memory bank, so much as the company with who the experience is shared.”

One Spring day in May 1979, I headed up the Grand Montets in Argentiere with an old American Ski Team friend, the late Jo Jo Weber from Chicago. That he looked like the Henry Winkler from the sitcom Happy Days only added to the humour we were enjoying as we rode up the cable car to top. There we casually headed out to ski the bowl below; or our first run there, yet somehow we were perhaps not concentrating too much and ended up heading slightly off track, down a wonderfully expansive and undulating open terrain, that just kept on getting steeper and steeper.

Jo Jo and I both stopped to check out what might lay ahead. It was quite early in the day and hence the spring snow was well stable and our racing Giant Slalom skis were cutting a fine edge into the trackless snow, so we just chose to continue on our adventure.

As the slope started to run out we had had to approach a rocky bluff that hid the rest of the descent and we had to peer over the cliffs to find some narrow gullies that dropped off into the huge inviting bowl below. The narrow couloir was especially steep and eventually opened out to an enormous expanse of perfectly pure, delicate and perfect spring snow. Just the two of us were total alone facing the whole of Mont Blanc Massif – it was more than special. The beautiful run headed towards the end of the Mer de Glace, where we took off our skis and walked down the path for 45 minutes to Chamonix.

For years I had no clue to what that area was called, I just remember it being one of the most impressive pieces of terrain that I have ever skied.

Roll on 38 year later and this year Johnny Vaitkus and Toren Hirshfield took me back down again the same run, known as the Pas de Chevre. Yet there was very sad difference. Most of the couloirs we had checked out we now just rocky chutes and rather than scramble down hazardous the hundreds of metre of loose moraine that filtered us back to the now grey valley, we donned our skins and hiked back up to ski the snow back down to Argentiere. I was shocked to see the huge shrinkage of the depth of the snow and the length of the glacier in those 48 years. So much more than I could have imagined. To be back skiing that terrain only reminded me how privileged I was to have accidentally stumbled on the mountains at their rawest and most challenging, with enough snow to enjoy them at their best.

In 1998 I spent a month working on the Olympic Winter Games and contrary to my initial knowledge of skiing in Japan I was amazed to find that Hakuba sat in the shadow of a range of mountains that reached 10,000 feet into the blue sky and there was a depth of snow of snow that I hadn’t seen for many years. There was one caveat though, the bright white and red warning signs – “off piste strictly forbidden”.

Years later an old Australian ski racing colleague of mine, Steve Lee, started posting photos on Facebook of stunning off piste skiing and I was very curious to what had changed. Steve told me that the locals had relaxed their original strict policy, as the ski market had collapsed in Japan and many of the resorts were running out of cash, so that had to open up new opportunities to attract new foreign customers. Right away I planned a trip to join Steve there the following year and rustled up my best skiing buddies to head East to explore the backcountry around Hakuba.

Tsugaike Kogen has perhaps the longest and widest and flattest nursery slopes that I have ever seen. The would have been completely full of aspiring skiers twenty years ago, yet as we rode the gondola that hardly gained any vertical height on its way up, we stared down on bare open pistes, with hardly a soul on them. At the top we donned our skins and headed up into the trees for forty five minutes and skied down some sparkling terrain, opened up our sandwiches at the bottom and then headed up and down a couple of times before we were perched above a white forest of silver birch trees, every branch glazed in white ice. Steve told us “just head down to the bottom” as he took his camera out to grab a few photos of us charging down between the widely spaced trees, with their over reaching canopy, which acted like a sieve, keeping each snowflake gently layered on top of each other with such a great depth that it was like skiing on bottomless white duvet of weightless feathers.

We found a continuous roller coaster ride of steep pitches and ridges and humps that were the most ideal playground for any keen skier; all covered in the most perfect snow, that made skiing the easiest that it has ever been. It was magical – Steve had brought us to his Magic Garden. And one of my buddies mentioned that it was “just like Narnia”

Which is why, unless you ski with either Steve Lee or his colleague and friend, John Falkiner, you will never find Narnia – the name is not on any map. It really is the Secret Magic Garden. 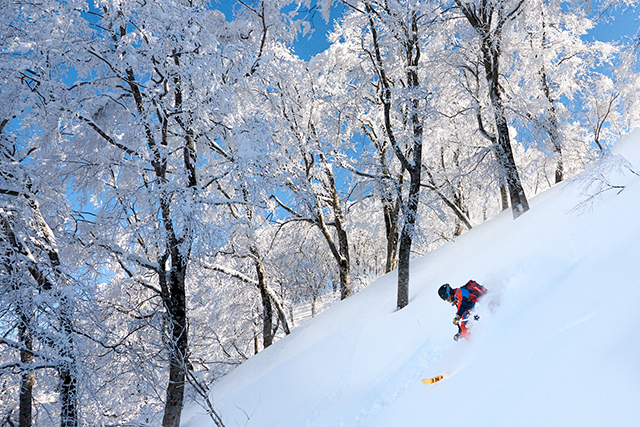 A decade ago in St Anton, my friend Graham Austick showed me a brochure for his new project, a ski lodge that he was building on the Arctic fjord coastline right in the far North of Norway. “There you can ski to the sea every day” Graham enthused, although I was hooked on the ide already.

It wasn’t long before I was on his boat, heading along the dramatic coastline to find his choice of run for the day. The island of Kàgen sits 70”N, with only the island of Svalbard half way between the top of Norway and the North pole. It is closer to the North Pole than most visitors to Antarctica ever get to the South Pole.

The rocky shoreline meant that we had to transfer in a small inflatable boat, unusually with our ski boots and wearing life jackets. There we set off to climb up and along the ridge to the jagged icy peak of Kàgen, where all around we could see almost an infinite array of mountains and islands in virtually every direction. The five hour climb was worth every calorie that was burnt, to be just nine of us alone in this Eden of totally stunning tranquillity.

The packed lunch of rolls and smoked salmon couldn’t have tasted better, before we then had the most incredible reward of skiing down the endless untouched fresh powder snow. The sun was slowly dipping towards the horizon and cast a beautiful gold hue on both the waves on the sea and the snowflakes in the vortex behind all the skiers. Visually it was the best of Renoir, Van Gogh and Rembrandt rolled into one….

And each inch that we skied was hard earned and hence each turn was that much sweeter, as the soft flakes flew over the skis, the size of smile on everybody’s face completing the story. Down at the coast we returned to Graham’s main boat where the beers were on ice to celebrate one the best days skiing that we ever had. It was a tired, hungry, yet very happy group that arrived back at the harbour in the dark. 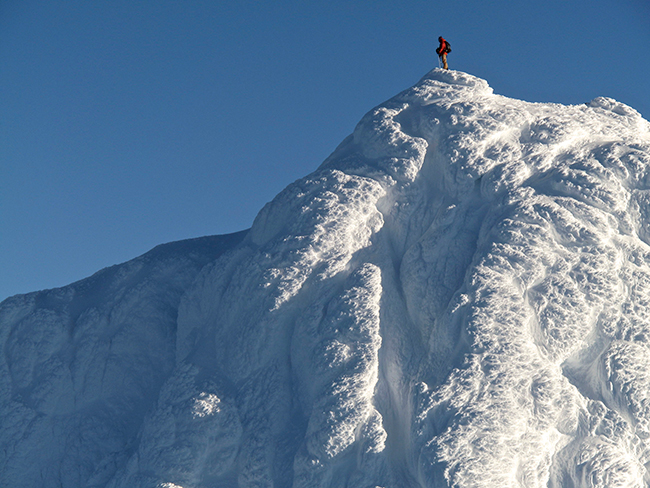 Graham Austick survaying the scene from the top of Kagen