“Crossing the line was like an out of body experience…” 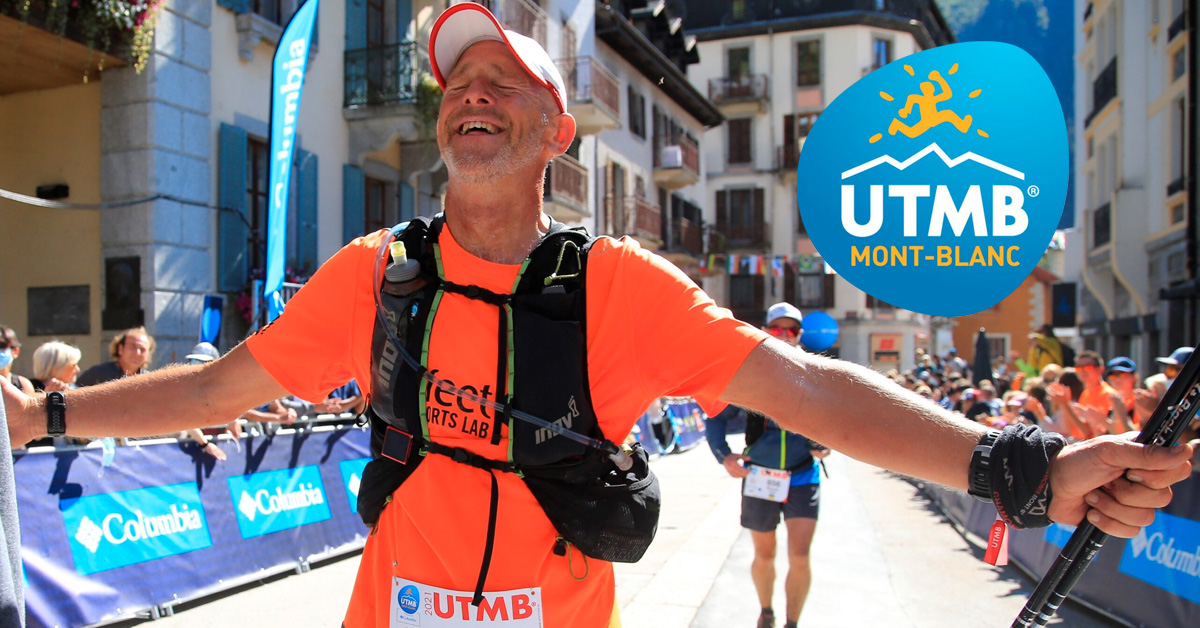 This month we are featuring two very different experiences of the epic Ultra Trail du Mont Blanc. This legendary race follows the classic Tour du Mont Blanc hiking path, starting and ending in Chamonix, forming a loop around Mont Blanc. It has a distance of approximately 171 kilometres (106 mi), and a total elevation gain of around 10,040 metres (32,940 ft) and is widely regarded as one of the most difficult foot races in the world.

Could you run continuously for 2 consecutive days?
Read them both and see what you think!

A good result certainly, but my mantra for the race throughout had been ‘finishing is winning’; my only goal was to get to the end.

How it all began
My journey to the start line was at least five years long, as to get a place in the UTMB you have to constantly accumulate and maintain points from other races, then be lucky in their over-subscribed ballot.

My place was finally confirmed at the third attempt in January 2021 and I launched into crowdsourcing advice from previous competitors, watched countless race reports on YouTube and read hundreds of articles until I was happy with my training plan. 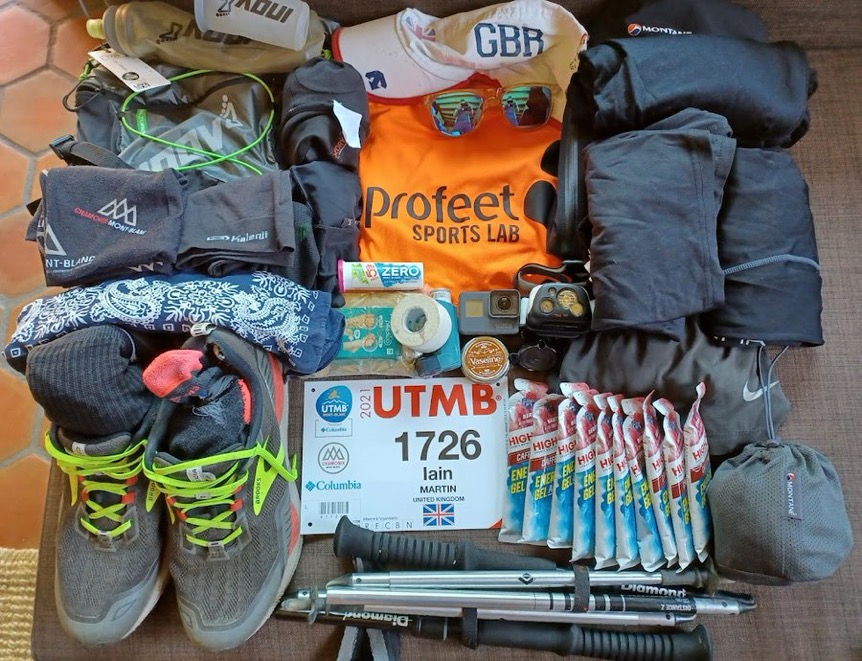 Kit check
For the next six months, I trained consistently, testing my kit, hitting my targets (including setting a new marathon PB) and averaging 90km of running a week.

That was topped off with two wonderful trips to the Alps: a tour of the best Swiss trails and a confidence-boosting recce of the UTMB course itself.

As the months became weeks, I finalised my pacing and nutrition plans, and all too suddenly I was watching the hours disappear very quickly on Friday afternoon before my 6pm start.

The plan was always to take it very easy to start. Plenty of competitors get carried away by the atmosphere, which was unlike any other I’ve experienced (in over 100 triathlons and 30 ultras/marathons).

The start line
The wall of sound through the streets of Chamonix, then at Les Houches, St Gervais (where I saw my family) and finally Les Contamines was amazing. Drums, bells, whistles, screams and then, when you leave Contamines for the darkness of the ‘real’ trail… nothing.

I passed the first checkpoint in 2185th place, before consistently gaining places as I climbed through the night to Refuge Croix de Bonnehomme (1507th). Cramping cost me a few places on the descent to Chapieux (1674th), but a mound of salt on a TUC biscuit resolved that.

The rest of the night was a cold, silent march forward. I stopped briefly on Col de la Seigne (1568th place) to admire the long snaking line of light from the headtorches on the trail behind me.

It was cold – just above zero – and when you’re moving you don’t notice, but the sunrise was all the more wonderful when it arrived. What a privilege to be able to watch the sun appear over the Italian alps above Lac Combal (1523rd). 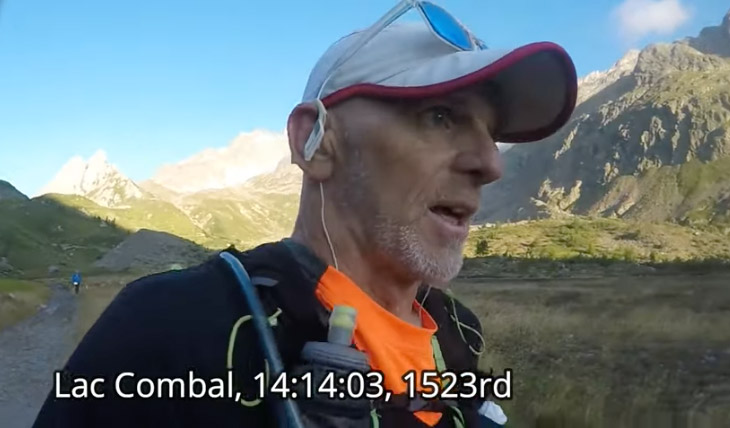 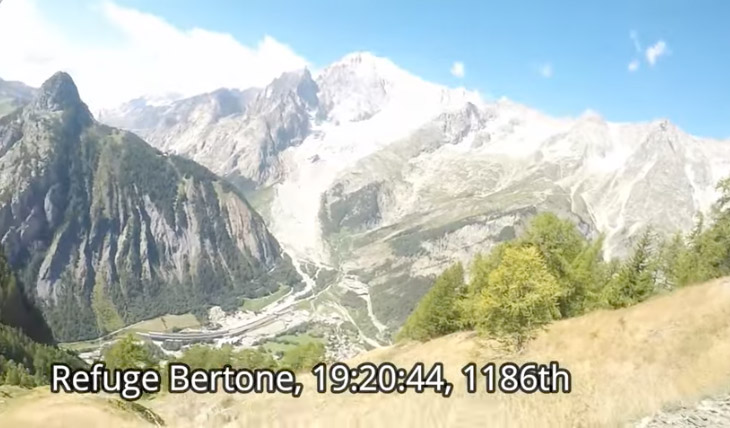 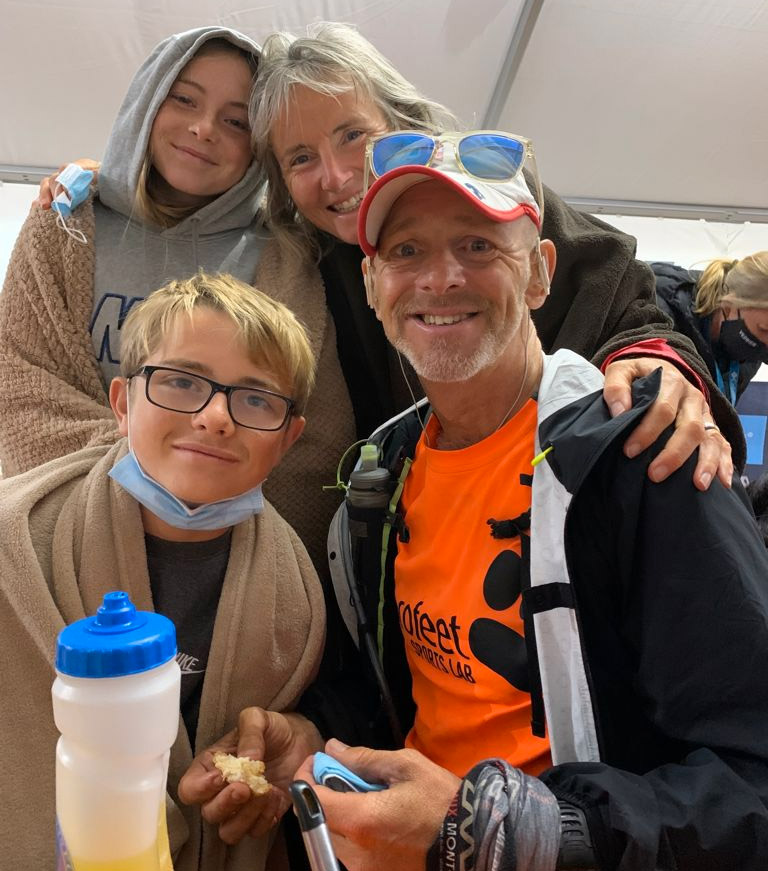 Halfway…
Courmayeur (1432nd) is almost half-way, but was ‘only’ 17 hours into the race. It was so good though to see Pip, the kids and Duncan. Chocolate milk, cheese sandwiches and a croissant provided – the breakfast of champions!

This is where the CCC – a mere 101km race that I completed in 2011 and 2016 – starts, so together with my recce just a month before, I knew this section well. Once the initial climb to Refuge Bertone (1186th) was out of the way, it was onto the ‘runnable’ section with stunning views of the Italian side of the Mont Blanc Massif.

Arnouva to La Fouly
The plan was never to think beyond the next aid station – 3 hours to there, 4 hours to there etc. The stage from Arnouva to La Fouly is long at 15km and passes the highest point on the course at Grand Col Ferret. A bitter wind made it very cold crossing the col, but while it didn’t feel like I was progressing well, I gained another few hundred places to 1097th.

That was 26 hours in and it was around this point that the race became more of an out-of-body experience. Keep moving forward; climb; descend; drink; eat; keep moving forward. Photo below: Feet up and refuelling in La Fouly. 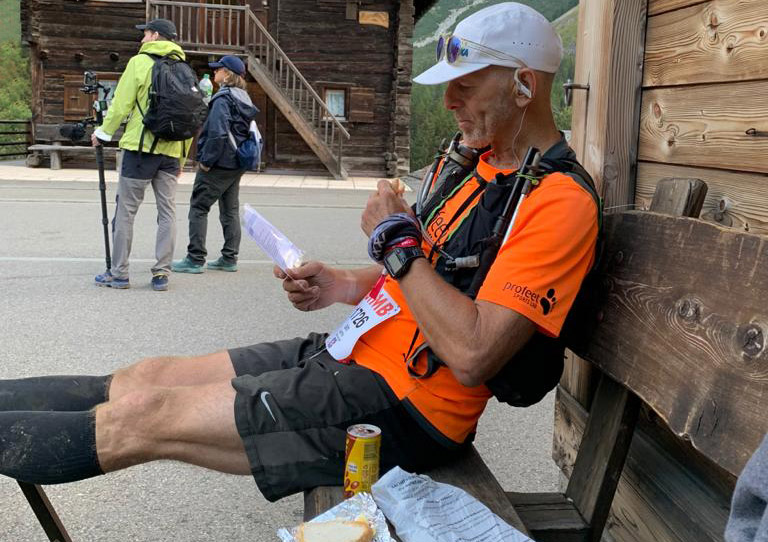 I don’t remember so much of the second night. I know my head-torch ran out of juice and I had to change it with only the light of the moon, while a silhouetted cow brayed a few metres away from me (pretty sure this wasn’t a hallucination). The new torch’s beam was so weak it wasn’t safe to run on my own, so I had to find a slower runner I could follow.

The night was cold, windy on the tops of the cols, but above freezing. I do remember the sky was super-clear. I stopped to take in the stars more than once: it’s so rare in our modern world that you can see the real night sky, Milky Way and all.

[ A note on hallucinations: I didn’t, in my opinion, have any hallucinations. I did see things in my peripheral vision that at first glance my brain interpreted as maybe a gorilla, or one of those dogs from Ghostbusters, but they always turned out to be just rocks or trees. ]

Trient?
There’s video proof that I was there (933rd), but I don’t remember anything about it. Vallorcine (850th) was different – my marvellous crew there to meet me, having scrambled out of bed and into the car with only a few minutes’ notice.

That’s because I was gaining time. Not unreasonably, I’d assumed that while going through a second night without sleep, after more than 130 kilometres, I would slow down, but the longer race went on, the stronger I felt.

It could have been that I was now close enough to know I would finish. I didn’t need to hold back. But my main motivation was that Pip was on a transfer out of Chamonix at 1230 and I desperately wanted to share the finish with her before she had to leave!

The last leg
The final climb from Col des Montets to Flégère (767th) is less a path and more a set of boulders you have clamber over and around, yet I was flying up them, hopping from rock to rock.

I would love to know what was going on physiologically – I was certainly powered by adrenaline, but I felt like I was looking down at myself as a climbing/hiking machine: one step, next step, another step, forward, forward, forward.

I gained more places from Vallorcine, even overtaking a few runners on the final descent from Flégère, as my descending suddenly became less cautious. I did miss one corner and have to hug a tree to avoid a sharp drop, but I was full of confidence. I knew I was going to finish, I knew Pip would be there. Chamonix was getting nearer; there’s the river; the Place du Mont Blanc; my crew; the finish line; the tears.

I finished in 41 hours 35 minutes in 755th place. But the time, the placing doesn’t matter: in the UTMB finishing is winning.

This account was taken from Iain’s own blog: Finishing is Winning!
Iain also managed to produce a video during his run, featuring an animated map of the route plus comments and highlights:

The UTMB is a bit of a “mind blower” even for the most hardy of ultrarunners. Yet, somewhere between the crazy distance, extremes of temperatures, challenging and at some points treacherous terrain, … and absolutely stunning views, the lure of this trail is irresistible.

Well done Iain – we take our hats off to you.

Don’t forget to read Pierre’s account of the UTMB 2021 too!