Rear Entry Ski Boots are Back! 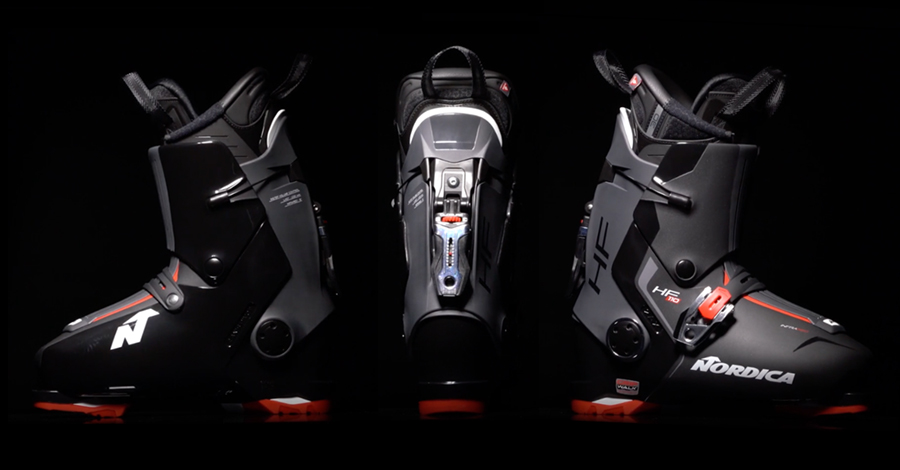 Rear entry ski boots revolutionised skiing equipment in the 1980s and early 1990s. The first boots appeared in the 1970s and all but killed-off traditional overlap ski boots. They were more comfortable, easier to walk in and easier to get on and off. 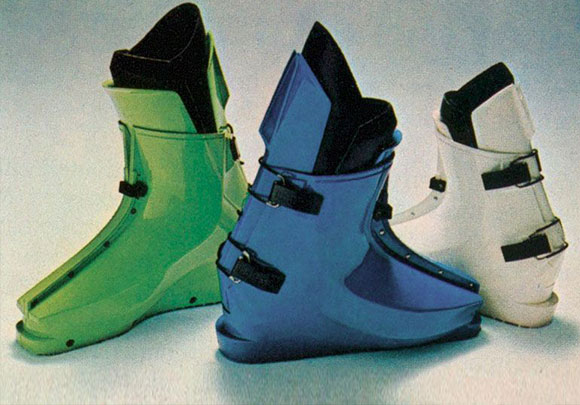 Hansen invented the rear entry ski boot in the 1970s1. The early Hansen design had a one-piece flexible front section that ran from the toe to the cuff as a continuous piece, rather than the more popular pivot design adopted by most of the other models that followed. They also featured a new liner construction with flo-fit materials as a way to fit and hold the foot without a buckle adjustment. 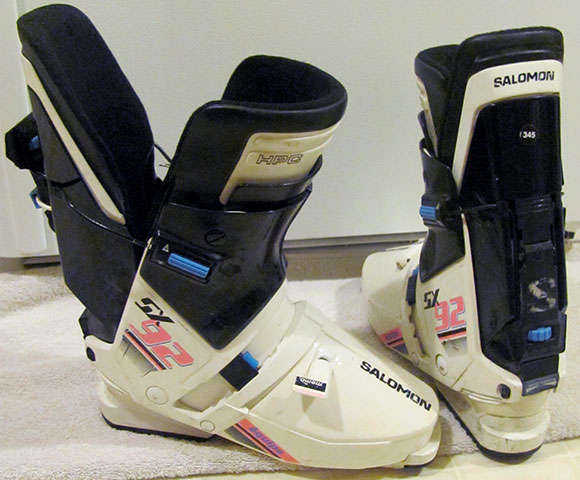 However, rear entry boots really took off when Salomon launched the SX90. The design introduced heel and forefoot hold, with micro-adjustment, overcoming the main problem of holding the foot without traditional buckles. They also introduced foam-injected liners that were warmer and could be customised to fit around bunions and ankle bones.

Salomon continued to dominate rear entry and ski boot design throughout this period with the legendary SX91 launched in 1984, which added flex adjusters, followed by the SX92 with fully cantable sole pads. The subsequent SX93 and SX95 models refined the design and fit even further. 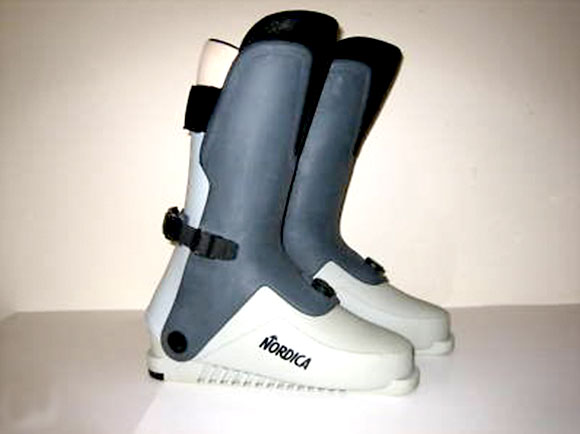 Nordica, as one of the leading boot manufacturers, were quick to follow suit and came up with all sorts of interesting concepts. One short-lived but the catchy design was the Nordica Polaris3, a knee-high boot. The theory was they would provide better leverage and spread the pressure over a greater area. Nordica also pioneered air fitting in the liner quickly became a leading manufacturer of rear entry boots with models such as the Nordica 955.

Why did Rear Entry boots disappear until now?

Despite the popularity of rear entry boots among the general public, racers and elite skiers had continued to use overlapping shells and most of the manufacturers had kept a few models for this reason. Salomon was the only leading manufacturer to be fully committed to rear entry boots and thus had some success in racing, with Marc Girardelli winning World Cup races in the SX90 Equipe and our very own Konrad Bartelski racing in them.

The convenience of rear entry boots and the ability to easily slip in and out of them has never been in question, but now with modern materials for the shell and liner, both comfort and performance can be improved. That said, the performance will likely never be a match for an overlapping shell, so the question is – do you need that level of performance or will convenience and comfort be the deciding factor?

This is surely the opportunity seen by Nordica with the New HF Rear Entry Models:

The Nordica HF (Hands Free) is a modern take on an old friend, designed for those who just want to keep skiing and appreciate like the ultimate in convenience, or a gentle introduction to ski boots. With a single rear buckle to close the shell and an independent instep buckle. the boot is very reminiscent of boots from the 80s – reengineered with a modern shell and liner and packed with Nordica’s latest innovative technology. 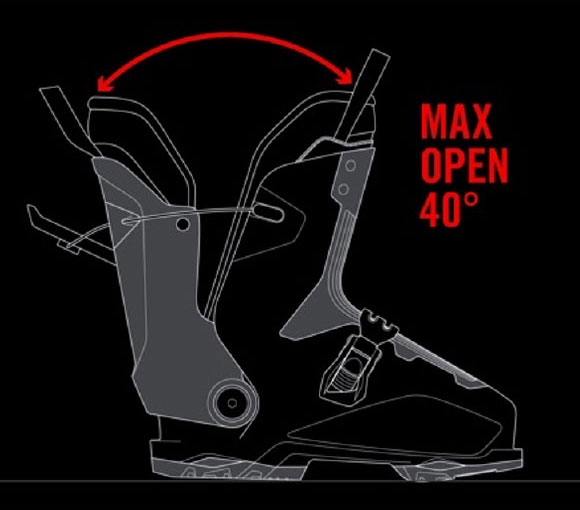 Shell: The cuff of the boot opens an incredible 40° meaning you can literally just step into the shell hands free. The shell can also be moulded around any bunions using Nordica Infrared fitting technology. The Double Axis Pivot point is an important feature as it increases the boots lateral stability (always a weakness of the rear entry design) and improves turn initiation and steering. It also improves closure between the cuff and the clog. 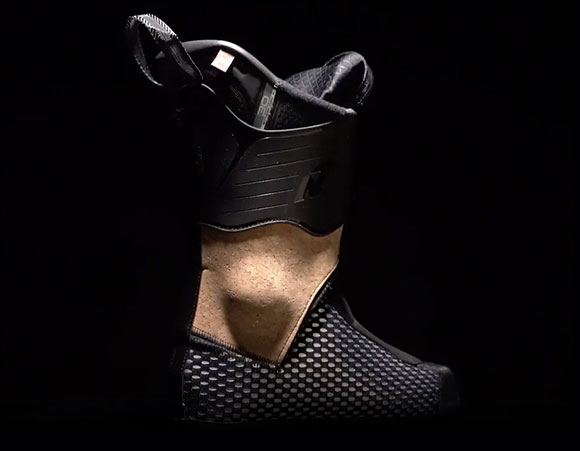 Liner: We feel the liner is one of the key improvements from Rear Entry boots of the past. It is more akin to those of overlapping shells and as such is more anatomic around the foot and leg than the old rear entry liners. The use of cork provides a solid heel and ankle grip and it opens 35% more than a traditional overlap boot, making putting the boots on and off effortless. 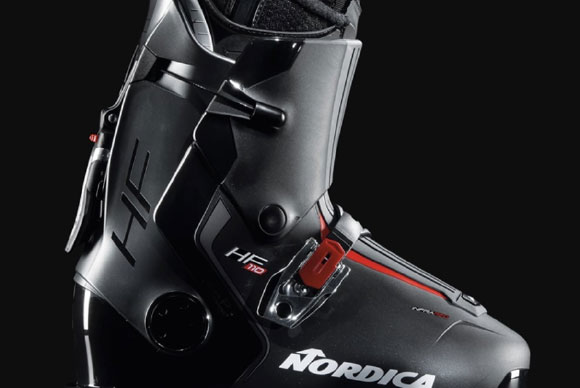 Buckles: Instead of four traditional buckles, the HF has a single rear buckle that is designed to be pushed down with your foot and opened with your ski pole – hence hands free! This buckle contains a micro calf adjuster which can be opened or closed to tune the fit and an independent instep ratchet-style buckle.

Our take on the New Nordica HF

Fit-wise, the HF is generous, especially in the leg, which means it is not designed for those looking for a performance fit. The forefoot width is also generous however the instep height (in comparison) is lower. The forward flex of the boot is relatively soft in comparison to a standard overlap boot however laterally the boot is stiffer than expected, due in part to the double-axis pivot.

The HF is very upright in its forward lean meaning it lends itself nicely to those with limited ankle flex or those not used to the forward flexed position that traditional boots require. Overall the HF is designed for skiers who want to keep skiing as fitness levels naturally begin to decline and comfort overtakes performance, or those new to the sport and have struggled with traditional rentals. It is also good for those who have fit requirements that mean traditional overlap boots are difficult.

This website theme developed by the Casinos not on Gamstop site which is a non UK gambling sites nonukgambling.com for games such as casino, poker and sports betting