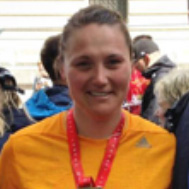 I’ve competed in many races (running, cycling and rowing) over the years but the London Marathon 2017 was something else, a week later I still can’t believe I did it!”
ROSIE YOUNG – Ski Boot Technician 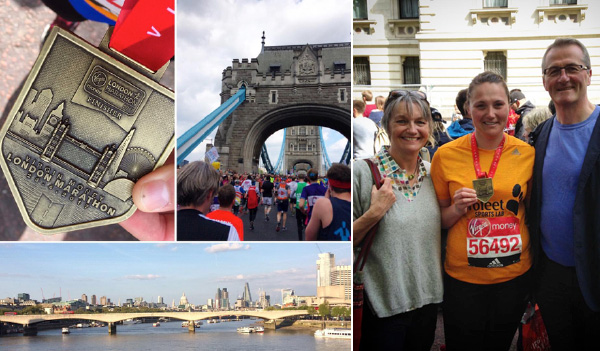 After being unsuccessful in the Ballot last October I was lucky enough to get one of two places Profeet had been offered through Adidas for the London Marathon 2017 and set myself the challenge of training for my first marathon.

I could’t have got luckier for my first marathon, firstly it was London one of the most iconic marathons in the world, the weather on the day was ideal and my training had gone more or less to plan from day one. All I had to do was put one foot in front of the other for a long time!

I had heard horror stories about the starting areas of these huge big events but I couldn’t fault the set up last weekend. Before I knew it, it was 10am and the mass start was off.

The first few miles, in fact the entire race is a bit of a blur, so many people and so much to see. I remember hitting the 5km mark and the women next to me asking how many kilometres there were in a marathon… I told her she was almost one eighth of the way there!!

The crowd at Cutty Sark were amazing but the highlight for me was definitely crossing Tower Bridge…I even took a few seconds to take a picture. By this point (half way) I had accepted that my mission of completing the race in under 4 hours wasn’t going to happen there were too many people and I wasn’t moving fast enough…and maybe I was enjoying it a little too much!

The next few miles were slightly quieter and gave me a chance to take in what I was actually doing, I’ve always liked running and enjoyed it as a way of clearing my mind but until recently running a marathon had always been a bit of a dream.

Soon the cheers and music round Canary Wharf powered me back towards Embankment. At this point I could see Big Ben and heard friends and family in the crowd and knew I was close to finishing. This was possibly the part I found the hardest emotionally, when you look around and see the thousands of people running for charities and causes that mean so much to them you realise how much some people overcome to run it makes the whole thing even more special.

I crossed the line in 4.07.47 and immediately wished I could do the whole thing again. Well maybe after my legs had recovered, they hurt A LOT!

Looking back I had the most perfect day… my body felt fine (just got more and more tired) I didn’t run out of water food or gels and my shoes worked great thanks to the running shoe fitting & gait analysis (thanks Profeet!). The organisers and crowd make this event fantastic, they carry you from start to finish.

Many people would cross the finish line and never want to run again….not me! Before I had even started properly training for marathon number one I had my second one booked… just as well I loved all 26.2 miles.

Time to get the trainers back on and get set for Edinburgh with Profeet’s Emma and Anna in just less than 4 weeks time!