The final day for Robbie Britton and James Elson saw them cover 99km in one day to reach the coast and complete their North-South crossing of Iceland.

Iceland doesn’t really do autumn in the Highlands. As soon as summer ends, they call it winter.

Foolhardy, bordering on reckless was how we had been described in the Icelandic press. It is just not possible to cross the Central Highlands in the winter months and the LaugaVegur trail had proved everyone right.

The route we had planned was a direct one from Akureyri, straight down to the most beautiful trail in Iceland for the grand finale. There were shorter routes to cross the island, taking in less hazardous environs, but that isn’t how we wanted to do this. We didn’t want it to be easy.

After being pushed to the ground by the wind on Day Six, we had to find another route. Rivers were flooding along our planned section and also on the next best option, another F road that was right next to the Skafta River, which had burst its banks in record glacial flooding. There was only the long way round.

If we wanted to finish within seven days, then it was going to be about 100km to the South of Iceland. All in one go. On road. We didn’t know if our feet and legs, battered and sore from the 260km beforehand, would be able to do it, but we had to try.

We set off early, hoping to make the most of the clear weather we had been promised. It was below zero but there was supposed to be no wind and rain. More adverse weather would be hard to swallow.

The snow flew directly into our faces as soon as we stepped out to start the day. Iceland is a cruel mistress.

The headwind felt slight compared to what we had become accustomed to but it was definitely there. Like a friend that no one likes but always turns up, we put our heads down and started to click off the distance.

As we moved across the last of the vast highland landscape, down our final dirt road for the trip, it was like being in the Australian outback, but for the glacial mountain ranges on the far horizon. Plus it was freezing cold.

The weather was less relentless than in days gone by, but we could see the squalls coming across at least 20-30 minutes before that hit us. We only had one road but we willed the clouds to miss us or change direction for no reason what so ever. Surely we deserved a little less of a battering today Iceland?

Tick followed tock and we kept moving along, soaked through by a rather aggressive hail storm but in high spirits due to the approaching coastline. All we could see was single lane road for miles ahead but we knew the end was coming.

Our pace stayed consistent throughout the day, a healthy mixture of Chia Charge and sugary energy food getting us through the day as low points were tackled head on.

A highlight was each of our support crew taking a turn to run with us along the way, a really nice way to end the journey, even if they did highlight how much we were shuffling like old men.

Family were there to meet us at Iceland’s main road, the One, and a surreal snack shop in a hardware shop ensued.

It was only an extra few kilometres to our finish and the thought of an end to such an amazing adventure gave an extra lift to our running. The rain was skirting just passed us and there was even an impressive double rainbow in the distance.

As we got closer to the water the road started to get further away, agonisingly close but needing to trespass to succeed. A stile, the bane of any long distance run, was our final obstacle and James and I cleared it in one full leap.

We staggered over and moved to the rocks going out into the water.

We had covered 360km over seven days, ending with a 99km run to the coast. There was a terribly British shaking of hands, some hugging and then we walked back to Helga. The biggest surprise this week was her making it all the way across in one piece.

Two pairs of shoes tentatively poked into the wash, not wanting to end our run with wet feet for the first time this week. We had made it. Foolhardy, my arse. 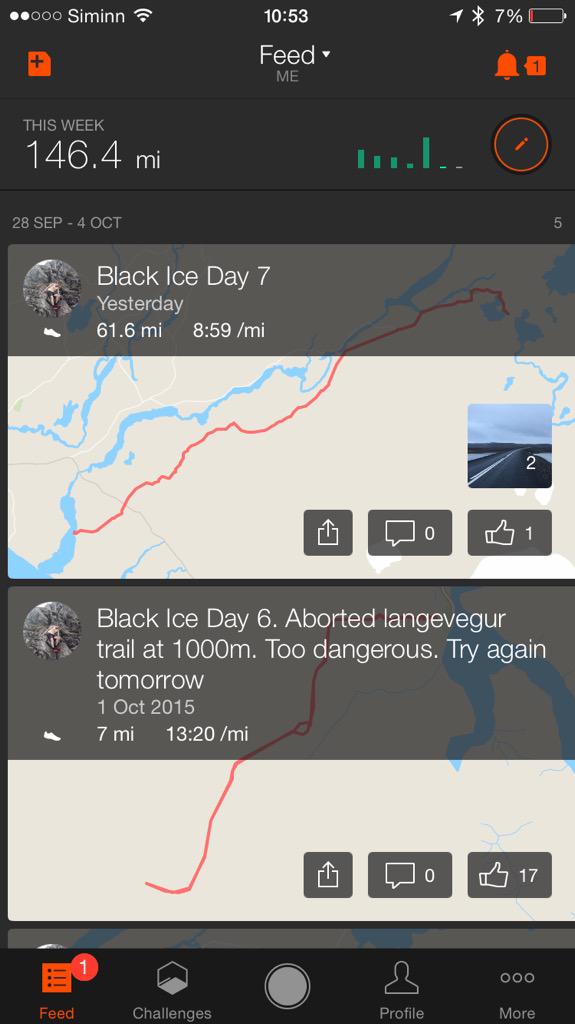