Compartment syndrome – what is this common injury?

Compartment syndrome is a condition whereby pressure in the muscles reaches a critical level. The pressure can reduce blood flow to the muscles, thus affect how well-nourished the muscle is and more importantly, the level of oxygen the muscle receives can be compromised.

There are two types of Compartment syndrome: acute or chronic.

Acute compartment syndrome is extremely serious and will need urgent medical attention. It is usually caused by a severe injury and is a medical emergency. It can lead to muscle death and damage if not treated quickly.

Where does compartment syndrome occur?

Compartments are basically areas of muscle, tissue and blood vessels which are surrounded by fascia. Fascia is a thin sheath of fibrous tissue surrounding the muscle. From an anatomical perspective they can occur in a lot of places:

We will focus on the leg as it is most important from a running perspective. The three main compartments are: Anterior, Lateral and Posterior. Within each of the segments many muscles can be affected, namely around the tibialis posterior, fibula, peroneal nerve and the tibilais anterior. 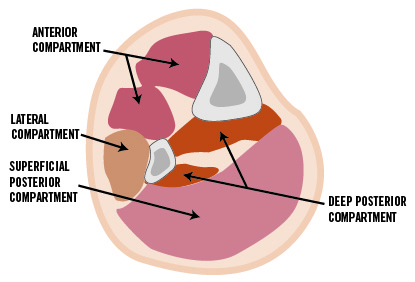 Why does compartment syndrome arise?

In the journal of Bone & Joint Surgery, McQueen (2010) states: A prompt diagnosis is necessary to minimise the risk in a predominantly young and active population of potentially devastating long-term complications such as muscle necrosis, contractures, neurological deficits, fracture non-union, infection, chronic pain, and in the worst cases amputation and even death.

This reiterates the notion that acute compartment syndrome is a serious injury that needs to be addressed quickly and thoroughly.

CCS (chronic compartment syndrome) usually arises from over exertion and increased myofascial pressures in the lower leg. It is a term given to describe reoccurring pains in the leg as suggested by Franca (1993)et al. Therefore, any form of intense physical activity can set off this issue.
Treatment

In most chronic cases, orthotics and physical therapy can help to relieve symptoms. In end stage cases surgery may be elected as a solution anyway.