Word on the street is that for 45th annual Berlin Marathon, Eluid Kipchoge is aiming for a PB. We all know his current PB is only 8 seconds off the (official) World record of 2:02:57, therefore is a new world record looking to be set on 16th September? Will he come anywhere close to the Nike Breaking 2 time? It’s not known for sure but all we know is Kipchoge means business.

He won’t have the race win handed to him however, that’s for sure. We know last year he was pushed all the way by Adola and there are 2 other men in the field this year which will certainly test him somewhat.

The first is former world record holder Wilson Kipsang whose current PB is an impressive 2:03:13 which he ran just 3 years ago and is currently looking in great shape for that sort of time again. The next is  Zersenay Tadese of Eritrea. He is a five-time winner of the world half marathon title as well as world record holder for the distance (58;23). He is the oldest of the three and has struggled it seems with the step up to marathons from the half distance. He boasts a current PB of only (in the grand scheme of things) 2:10. Therefore he will certainly be able to push the two the first half off the race but may fade in the latter stages. 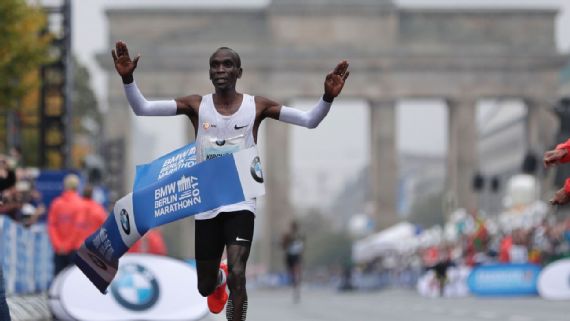 The famous runner Tirunesh Dibaba is set to run the roads of Berlin this weekend as she goes for the win. With a pretty stellar career so far including 5 World titles, 3 Olympic titles and multiple marathon major wins, she is definitely searching for that icing on the cake of the WR. Her current PB of 2:17 is only 1.5 minutes off the world record which is still held by the great Paula Radcliffe. If conditions are right on Sunday on one of the fastest marathon courses could she take the record?

There are only two or three other women in the field with a PB around 2:20 who could vie for the win. Gladys Cherno who has won this race twice before has a PB of 2:19:25, plus is looking in great form based on recent achievements. One of the legends of the female marathon Edna Kiplagat, is also in the race as a contender. With a PB of 2:20 from 2011 it is unlikely she will take the win but the longevity of her career and wins she has achieved (Double World Marathon Champion) make her a special elite entrant in this year’s race.
Update 17th September 2018

Eliud Kipchoge did indeed set a new marathon world record Sunday, winning the Berlin race in 2 hours, 1 minute and 39 seconds. In a tweet the organisers described him as “the greatest marathon runner of all times.”