The function of glutes is essential for a variety of sports including running and skiing. They are considered the powerhouses that help to not only stabilise the pelvis but aid power when generating movement.

There are 3 major muscles that make up the gluteal region: Gluteus Minimus, Gluteus Medius and Gluteus Maximus 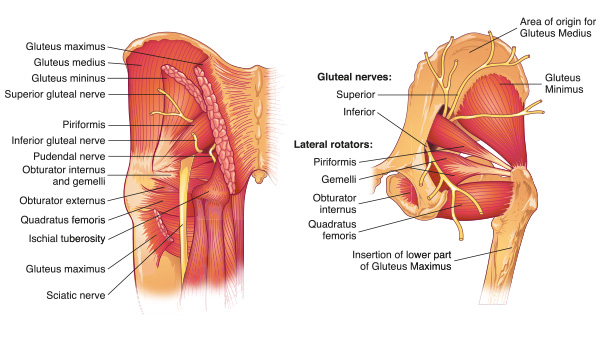 The main function of Gluteus Medius is simply to contract isometrically, stabilise the pelvis and control femoral motion during dynamic movement of the lower limb to initiate forward momentum of the torso ahead of the hips (Fujisawa, et al., 2013). Anatomically, the muscle attaches to the entire length of the iliac crest and external ilium (Hip Bone), the gluteal fascia, the posterior border of tensor fascia latae (TFL/ITB (Sulivan, et al., 2010) as seen on the Figure right: 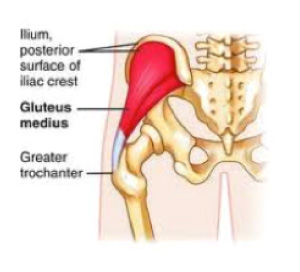 Due to its location and function, it’s commonly related to ACL injuries, low back pain, patellofemoral pain as well as development of IT band friction syndrome (Born, et al., 2011). Furthermore, it was suggested that a decreased strength of the gluteus medius (GMed) and the gluteus maximus (GMax) muscles are closely link to different knee pathologies.

Even though both running and skiing involves motion of the whole body, muscles of the lower extremities play a primary role in engaging motion action. In running, gluteus maximus and gluteus medius are both active at the beginning of stance phase as well as at the end of swing phase. In skiing, hip muscles, hamstrings, quadriceps, calves and muscles in the feet are considered the prime movers.

It is important to realise, that although both activities engage the same muscular region, their function changes in relation to specificity of movement (Flanagan, 2012). Hip and ankle do not tend to change significantly during a turn in skiing, so the speed of contraction is relatively slow. While running, however, gluteal muscles extensively contribute to weight bearing movements by helping to transfer the load through the hip joint, supplying local structural stability to the hip joint and maintaining lower extremity alignment of the hip and knee joints (Macadam, et al., 2015).

For that reason, it is crucial to maintain adequate strength in these structures for optimal performance relative to activity. You might think about doing a lot more isometric or slow contraction glute strength for skiing but then need to do more high intensity ballistic strength movements targeted to running.

According to research, to improve the strength of Gluteus Medius, weight-bearing exercises are generally recommended, as they have been shown to produce significantly higher muscle activity in comparison to non-weight-bearing exercises (Stastny, et al., 2016). This is related to the need for greater muscular control due to the greater external torque forces on the femur and the pelvis.

Our Sports Assessment for running and skiing includes a thorough biomechanical assessmentconducted by our team of sports scientists, sports rehab specialists, sports therapists, biomechanists and podiatrists. This will give you all the information you need to decide what action to take to prevent imbalances and other issues from becoming injuries. Regular stretching and improving muscle strength can help but you may also need custom insoles.