An epic ride from Vesuvius to Mount Etna

Profeet ambassador Robbie Britton takes on the beast that is the Two Volcano Sprint – fuelled by 100 packets of Mentos! 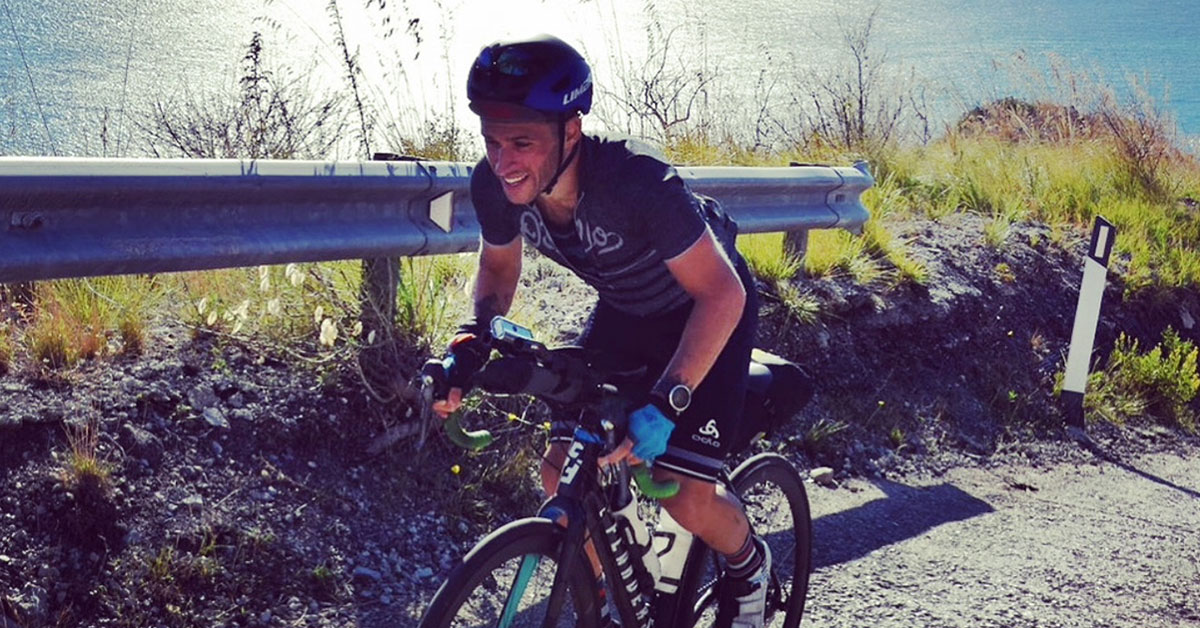 It’s not often I’ll go back to the same race twice, but something about cycling 1050km from Naples to Sicily that dragged me back in.

In a year where you had to jump at chances to race, the Two Volcano Sprint was just in the nick of time. Mid-October before a second wave of lockdowns in Italy and an overly competitive start-list due to the lower number of races overall, it as party time.

Starting at the foot of Vesuvius we had to climb the volcano at 5 am on the Sunday morning and then cycle a rather hilly route all the way to the point of Italy’s boot, stuff our faces on the 20 min ferry crossing and then a few more hills before Mt. Etna and down to the finish.

Last year I was 4th and it took 80-odd hours. This year the goal was to go faster (obviously) and not make as many rookie mistakes, maybe make some new mistakes and learn from those too.

Confidence in a faster finish was high, but not down to one single reason. For starters, the weather was much nicer, if a little colder, so that’s not even down to me. Secondly, I was a better cyclist and last, I’d actually input the route into my GPS device correctly this time!

Under three days seemed like a nice target and pushing the limits of sleep deprivation a neat way of getting there.

Instead of using copious amounts of caffeine, the plan this time was to focus more on fuel during the dark hours and see if that helped prevent the sleepiness from getting as bad. Carbs were on the menu and I think over 30 packets of Mentos were eaten on the first day and a half. 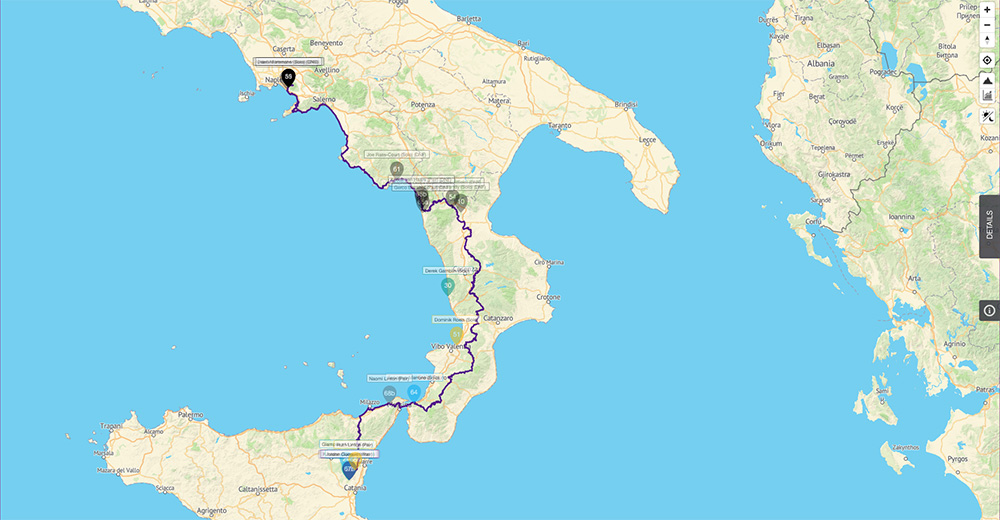 Working at the lower intensities of an ultra distance cycling event you’re relying on a mixture of carbohydrates and fats to keep the engine going. The easier you go, the higher a percentage of body fats you’re able to utilise, but you still have to keep the carbs trickling in.

With a mixture of sports drinks, coca-cola mixed with fruit juice, Precision Hydration 1500 sachets, packets of Mentos and some more “real food” like pizzas, arancini, sandwiches, bananas and anything else that was easily accessible along the way, the plan was to keep it going in regularly.

Mentos might not seem the most sensible source of sugar, but when you’re self-supported you need to either carry food from the start or find it along the way and every bar and small tabac has Mentos or some equivalent.

The second factor is my lack of handling skills. No handed isn’t really an option. Mentos, if you bite off one end of the packet, can be squeezed into your face (via the mouth normally). Half a packet at a time is about equivalent of a sports gel and I happen to like them anyway.

The “right” food is no good if you can’t get it on the road and you struggle it eat it on your bike. The same goes for running races too. If it’s hard to get your gels then you’re less likely to take on the fuel you need. Any excuse. 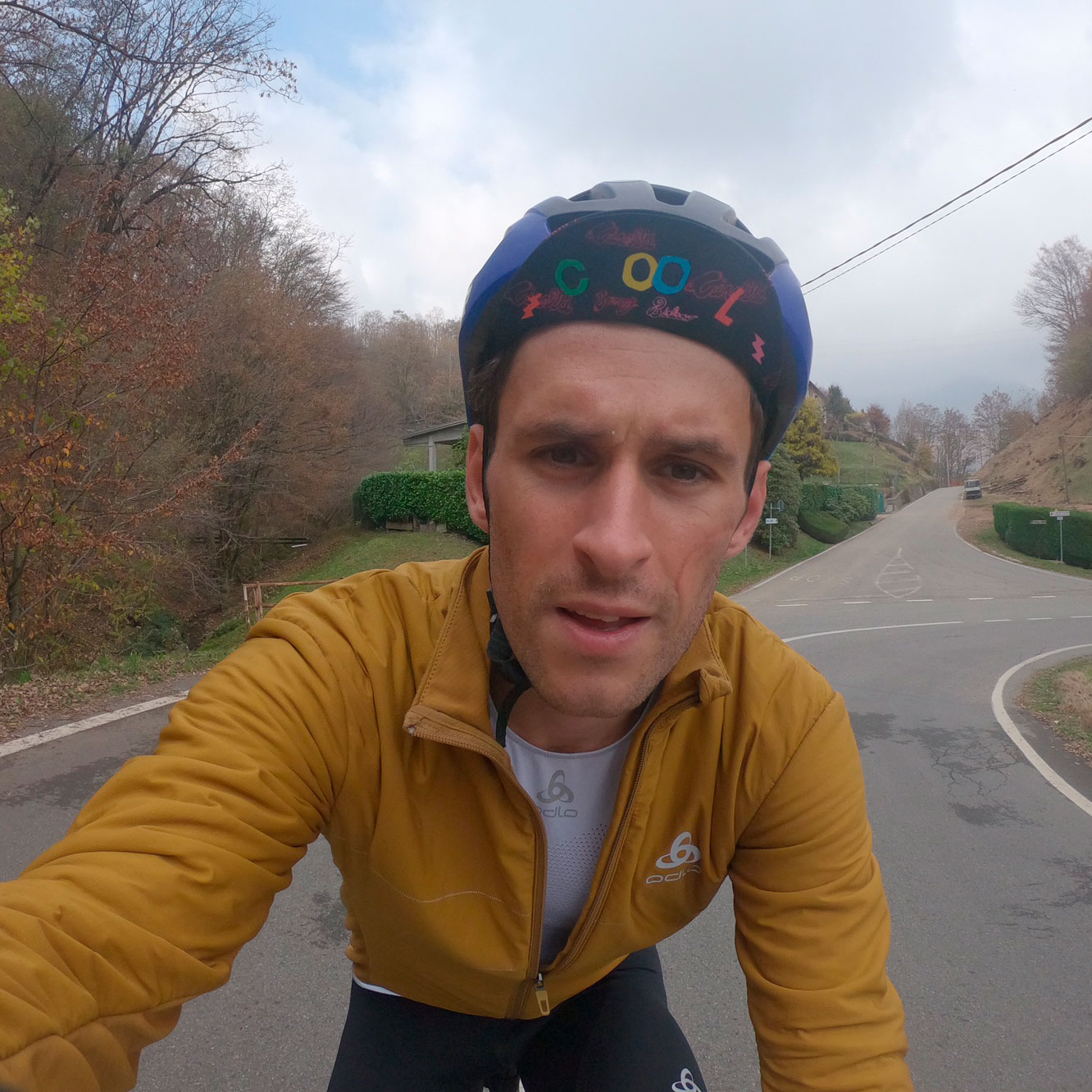 The first night was a dream. The sleepiness was staved off by the Mentos (mostly) and some caffeine in forms of coffee, coca-cola and some caffeine chewing gum. Temperatures were nice and it wasn’t pissing it down with rain.

The pace at the front was frantic, but then they started to drop, crash, slow or go to sleep for a bit. The plan to get into the top five again seemed alright, but it was still early doors.

Some research has highlighted the build-up of adenosine as one of the reasons we get drowsy cycling through the night. It builds up more when you don’t have the fuel you need for what you’re asking of your body, but as it builds up the only way to dissipate it is to sleep. Caffeine will fuzz up the signals, but when it wears off the problem is still there, bigger still.

So after 36 hours of cycling it feels a little like it’s unravelling. An overwhelming sadness comes across me. The task ahead seems pointless and at one point tears were shed on the side of a road.

The problem with sleep deprivation is when you need to make smart decisions, you’re at your sleepiest and you make horrifically bad decisions. A sleep in the town before could have left me fresh to tackle the night ahead. A restock of food at the last shop before a hotel would have been wise.

But was this self-sabotage. I found a hotel that would take me, but a three hour sleep and quick departure was less likely without any extra food. My subconscious had made it easier to have a full night’s sleep. The threat of that sadness in the middle of the night, alone on a mountain side, was hanging over me too.

So a proper sleep, maybe 5-6 hours, a 5am departure meant the world would be opening up soon anyway. With a few packs of mint mentos (like brushing your teeth right?) and my emergency gels at hand, off I went into the darkness again.

It turned into a ride of two halves, with a big sleep in the middle. The words of my friend Andrew Philipps, who was somewhere further up the road, sat with me. Better to have a sleep and actually enjoy the cycling than go without and being miserable the whole time.

The second, well third in reality, day of cycling was a joy. The legs felt good, the heart was strong and the smiles were aplenty.

One of the joys of doing this race a second time was that everything I’d passed in darkness the year before was in the light this time round. The joy of still being half a day faster than previously.

The food kept going in and the further south we got, the better the arancini become. The best of those were at the finish line, in a cafe we could all sit in for the days ahead.

Reaching Sicily the options were to get a hotel on the coast and finish the next day or cycle through the night and finish as soon as possible. This is a race remember, even if I’m not winning.

Starting the climb from Messina, I put off the decision for a few hours, but I already knew I would push through. The adventure is too much to resist and the finish line was starting to pull me closer.

Late-night bakeries and ice cream shops were hit for mentos, cakes and baked goods. The pockets were full of fuel and the beauty of cycling through the night is always worthwhile.

The temperatures dropped and got below zero before the 1800m high point on the side of Mount Etna, with icy roads and all my clothes on my body. I don’t have enough fingers to count the layers, but I looked like the Michelin man on a bike.

It wasn’t until the last couple of switchbacks of that climb that I saw the red taillight of Fanny Bensussan ahead, 11th placed and 2nd lady, who had passed whilst I sleep in the hotel the night before. I don’t think she was too happy to see me, but she had been racing Ana Orenz for the women’s win and both had barely been off the bike the whole time. I can only dream of that level of commitment and hope I can get to that point in the future too.

With cold hands and face, cold everything really, I rolled into the finish a fair bit quicker than last year, just over my arbitrary three day total and content with my effort. As the feeling came back to my feet the pain was pretty intense, but next was one of my favourite parts of ultra-distance cycling: the past race community.

One of the beautiful aspects of this sport is the people. They’re humble, self-deprecating, hardy souls with a good sense of humour. You have to be or you wouldn’t make it through the night.

Everyone sat in the cafe next to the finish, waiting for friends and all the riders to finish. It certainly helped that the cafe had some of the best cakes and arancini I’ve ever eaten, but also beers and coffees for all too.

We shared war stories from the race itself and adventures past. Everyone smiled, laughed and cheered in fellow riders. Even if you’d had to scratch and get the train in you were met with admiration for taking the challenge on in the first place.

The last riders to finish were Naomi and Ruth Linton, twins who’d decided to tackle the race together and they got the biggest cheer of all, rightly so in my eyes. Their war stories are certainly greater than mine and a joy to hear.

The big question now, will I be able to resist the third year and what can I improve next time?

Find out more on The Two Volcano Sprint website